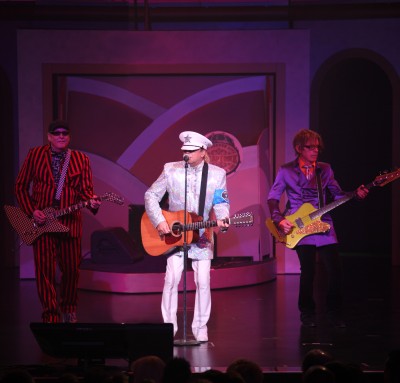 LAS VEGAS, NV (April 27, 2010) – “Sgt. Pepper Live” featuring Cheap Trick, a dazzling musical experience featuring world-famous rock stars, the Sgt. Pepper Symphony Orchestra and a live interpretation of one of the most beloved rock albums in history, will take the stage for a limited engagement beginning June 11 at the Paris Las Vegas Theatre.

A Bill Edwards Presents Inc. production, tickets for “Sgt. Pepper Live” featuring Cheap Trick are now on sale. Tickets are priced at $75, $100, $125 and $250 and a VIP package priced at $275.  All ticket prices are plus applicable tax and fees and may be purchased at the Paris Las Vegas box office or on-line at www.parislasvegas.com or www.ticketmaster.com or by calling 1.888.727.4758.

A celebration of The Beatles’ influential album, Sgt. Pepper’s Lonely Hearts Club Band, the show is an energetic performance that features an orchestra and a captivating experience of light and sound as Cheap Trick perform the entire album live as well as select Cheap Trick songs that lend themselves to orchestral arrangements.  Geoff Emerick, the renowned engineer of The Beatles’ classic 1967 album, supervises the audio production. Never performed in its entirety by The Beatles due to the complex studio technology of the day that was employed in the making of the album, “Sgt. Pepper Live” allows Cheap Trick to incorporate their brand of power pop into the classic songs while paying tribute to music legends in an unforgettable musical experience.

“Paris Las Vegas, at the heart of the Las Vegas Strip, is the perfect venue for this world-class musical experience,” said Bill Edwards, CEO of Bill Edwards Presents Inc., and executive producer of the production.  “Bringing the music of The Beatles together with the performance of Cheap Trick creates an unforgettable show that brings to life one of the most beloved albums in rock and roll history in a truly innovative way.”

Cheap Trick is best known for its classic singles, “I Want You To Want Me” and “Surrender.” The American power-pop progenitors recorded the album All Shook Up in 1980 with Sir George Martin and Geoff Emerick, producer and engineer of Sgt. Pepper’s Lonely Hearts Club Band. Emerick will continue to oversee the audio production for “Sgt. Pepper Live.” He received Grammy Awards for the engineering of Sgt. Pepper’s Lonely Hearts Club Band and Abbey Road.

From its dramatic 50-story replica of the Eiffel Tower to authentic architectural reproductions, Paris Las Vegas features elegant décor, European-inspired boutiques and a distinctive array of fine cuisine, including Chef Joho’s acclaimed Eiffel Tower Restaurant, Les Artistes Steakhouse and French-bistro Mon Ami Gabi.  The resort celebrates the romance and excitement of the European City of Light.   In the heart of the famous Las Vegas Strip, the passion and sophistication of Paris Las Vegas transports guests to Europe’s most romantic city. Paris Las Vegas is a Harrah’s Entertainment Resort.