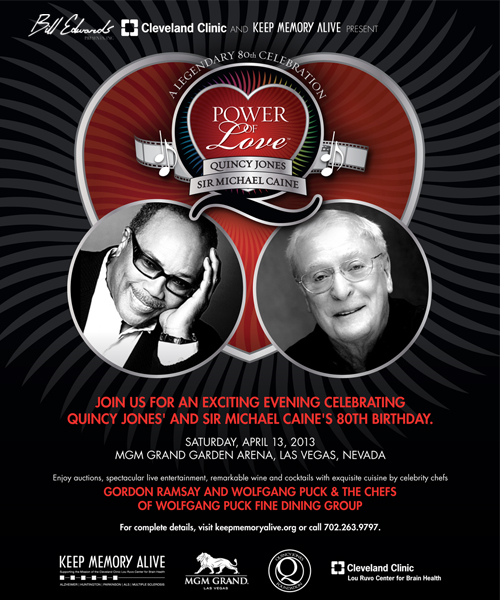 The star-studded tribute celebrates the 80th birthdays of one of the most influential jazz musicians of the 20th century and one of Hollywood’s hardest working actors and Academy Award winners while also raising funds in support of the Cleveland Clinic Lou Ruvo Center for Brain Health.

Celestial twins, born in the same year, same month, same hour and within minutes of each other, one in Chicago, the other in London, Jones and Caine met decades ago and have been great friends. This will be the third time they will celebrate their day together, and this 80th milestone year will be celebrated with the world’s celebrities of music and film.

Legendary music producer Quincy Jones, named by Time magazine as one of the six most influential jazz artists of the 20th century, has spent more than 60 years in the entertainment industry working with America’s greatest musicians including Ray Charles, Frank Sinatra, Stevie Wonder and Michael Jackson. One of the most decorated entertainers of his time, Jones has garnered 27 Grammy Awards, a record 79 Grammy nominations, seven Academy Award nominations, a Tony Award nomination and an Emmy Award.

In keeping with its 16-year history, Keep Memory Alive’s Power of Love Gala will include a celebrity-chef dinner, a one-of-a-kind live and silent auction and a night of star-studded performances. The funds raised by the annual gala support the mission of the Cleveland Clinic Lou Ruvo Center for Brain Health to enhance treatments and research for Alzheimer’s, Huntington’s and Parkinson’s diseases, multiple sclerosis, ALS and memory disorders of all kinds.

The Power of Love Gala is supported by the Las Vegas Convention and Visitors Authority (LVCVA), official sponsors HARMAN and Playground Sessions, and Keep Memory Alive, the fundraising arm of the Cleveland Clinic Lou Ruvo Center for Brain Health.

For information regarding this unique celebration, please visit www.keepmemoryalive.com or call (702) 263-9797. Follow the event on Twitter with the hashtag #onememory.

ABOUT CLEVELAND CLINIC LOU RUVO CENTER FOR BRAIN HEALTH
Cleveland Clinic Lou Ruvo Center for Brain Health provides state-of-the-art care for cognitive disorders and for the family members of those who suffer from them. The physicians and staff at the Center for Brain Health are devoted to excellent patient care, support of caregivers and development of new treatments in clinical trials. The Center offers a patient-focused multidisciplinary team approach to diagnosis and treatment, offering patients a complete continuum of care and integrated research opportunities. The facility, designed by Frank Gehry, includes clinical resources, advanced brain imaging, physical therapy, research, and the Keep Memory Alive Event Center. For more information, visit www.clevelandclinic.org/brainhealth.

ABOUT KEEP MEMORY ALIVE
Keep Memory Alive, whose mission is to provide enhanced treatment and ultimately cures for patients and their families suffering from neurocognitive disorders, raises awareness and funds in support of the Cleveland Clinic Lou Ruvo Center for Brain Health. By supporting Keep Memory Alive and its fight against neurodegenerative diseases such as Alzheimer’s, Huntington’s, Parkinson’s, ALS and memory disorders of all kinds, we can ensure progress towards better treatments and ultimately cures will occur in Las Vegas. For additional information call (702) 263-9797 or visit www.keepmemoryalive.org.

ABOUT BILL EDWARDS PRESENTS INC.
A premier live entertainment company, Bill Edwards Presents Inc. has been producing world-class attractions for more than a decade. The company has established itself through producing shows and events in a variety of venues – including festivals, theaters, casinos-resorts, performing arts centers and arenas. Known for its reputation of aligning with award winning talent, Bill Edwards Presents (www.billedwardspresents.com) is based in St. Petersburg, Florida.

ABOUT LVCVA
The Las Vegas Convention and Visitors Authority (LVCVA) is charged with marketing Southern Nevada as a tourism and convention destination worldwide, and also with operating the Las Vegas Convention Center and Cashman Center. With more than 150,000 hotel rooms in Las Vegas alone and 10.6 million square feet of meeting and exhibit space citywide, the LVCVA’s mission centers on attracting ever increasing numbers of leisure and business visitors to the area. For more information, go to www.lvcva.com or www.LasVegas.com.

ABOUT HARMAN
HARMAN (www.harman.com) designs, manufactures and markets a wide range of audio and infotainment solutions for the automotive, consumer and professional markets – supported by 15 leading brands, including AKG, Harman Kardon, Infinity, JBL, Lexicon and Mark Levinson. The company is admired by audiophiles across multiple generations and supports leading professional entertainers and the venues where they perform. More than 20 million automobiles on the road today are equipped with HARMAN audio and infotainment systems. HARMAN has a workforce of about 13,400 people across the Americas, Europe and Asia, and reported sales of $4.4 billion for the 12 months ended June 30, 2012. The company’s shares are traded on the New York Stock Exchange under the symbol NYSE: HAR.