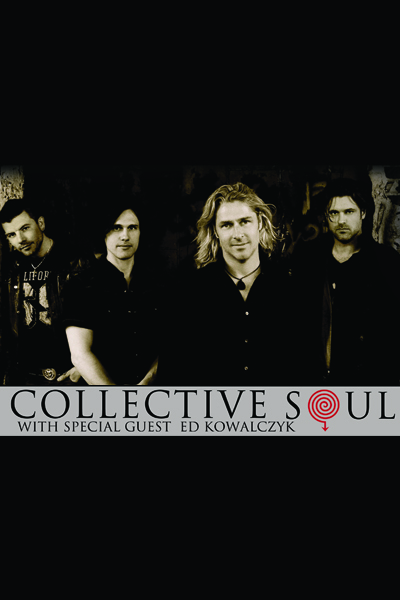 American rock band Collective Soul, who broke into the mainstream 20 years ago with the hit single “Shine,” will perform at The Mahaffey Theater with special guest Ed Kowalczyk, former lead singer of the band Live.

Hailing from Atlanta, Collective Soul consists of vocalist Ed Roland, rhythm guitarist Dean Roland, bassist Will Turpin and lead guitarist Joel Kosche. This multi-platinum band with a catalog of No. 1 hit singles shot to international fame with the 1993 release Hints, Allegations and Things Left Unsaid. The album, a collection of Ed Roland’s demos, spread quickly through the college underground circuit and caught fire, achieving double-platinum status.
Collective Soul released their second album, Collective Soul, in 1995 after their performance at the 25th Anniversary Woodstock concert. This album helped define their sound of catchy melodies and guitar driven songs. Containing three singles that reached No. 1, “December,” “The World I Know” and “Where the River Flows,” and No. 2 hit “Gel,” the album went triple-platinum and spent 76 weeks on the Billboard Top 200 charts.

Collective Soul created their own record label, El Music Group, and released Youth in 2004 and two other records and a concert DVD. In 2007, the band made an exclusive deal with Target stores to be the sole seller of their seventh studio album, Afterwords, which opened at No. 25 on the Billboard Comprehensive Albums Chart and No. 5 on the Billboard top Internet Albums chart.

More recently, the single “Tremble for My Beloved” was featured on one of 2008’s hottest movies, Twilight.

Special Guest Ed Kowalczyk was the lead singer and primary songwriter for the band Live (formed in 1988) and left the band in 2009, launching a solo career. He released Alive in 2010, The Gardenin 2012 and The Flood and the Mercy in 2013.