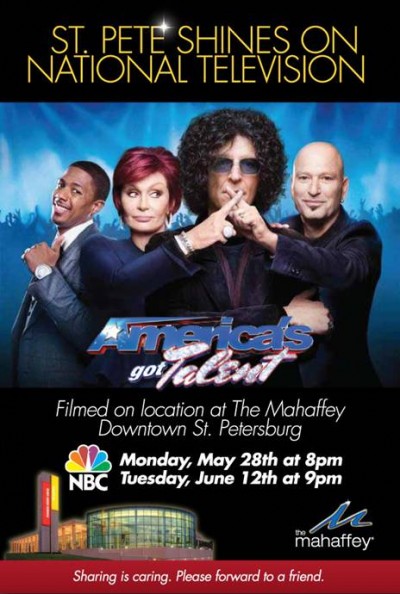 Howie Mandel, Sharon Osbourne, Howard Stern and host, Nick Cannon sailed into town to tape the two-part show at the newly renovated theater in April, as thousands of the Bay area’s residents seized the chance to be a part of the studio audience.  With more than 20 million viewers tuning in for the show’s premier week on May 14-15, America’s Got Talent can help brand St. Pete as Florida’s entertainment destination.

The seventh season of NBC’s hit talent competition will showcase diverse talent from across the nation, as well as the natural beauty of some of America’s best towns and cities. The Mahaffey’s management team pushed for NBC’s America’s Got Talent to tape at the theater for the opportunity to demonstrate the beauty of the city on a national scale. When viewers tune in, they’ll see a magnificent overhead shot of The Mahaffey as a camera pans the beautiful waterways of Tampa Bay. The show’s producers captured the best of the bay while filming at St. Petersburg’ performing arts gem.

Joe Santiago, General Manager at The Mahaffey, spent a good portion of NBC’s taping week with the executive producers of theshow.  “The on-site crew was absolutely enthralled with the venue.  They went so far as to say that it was truly one of the most beautiful venues that they have been in – with the view of the Bay, St. Petersburg, the Dali museum and the entire campus,” he commented.  “They were also ecstatic about the scenery and the beauty that the downtown’s water views provided for the arrival of Howard Stern, Sharon Osbourne, and Howie Mandel.  They believed that it would be the best arrival shot of the season.”

Show community pride this MEMORIAL DAY, and tune in to catch the best amateur performers on television, some of which hail from the region. Being featured on the hit show will put a spotlight on the area and help further the city’s national presence, essentially creating a platform for future endeavors.

“If viewership is high in Tampa Bay, it will lead to more national television prospects and encourage more shows to tape in the area, exposing our breathtaking city to national audience,” stated Bill Edwards, CEO of Big3 Entertainment. “Producers of ‘America’s Got Talent’ saw the untapped potential of St. Petersburg which was just named the Top Arts Destination for mid-size cities by American Style Magazine for the third year in a row – St. Pete does it big!”

The Mahaffey, now under the management of Big3 Entertainment, is one of Tampa Bay’s top-rated performance arts venues. Home to the Florida Orchestra, The Mahaffey hosts top-quality national and international artists and performances – Broadway, pop, rock, comedy, dance, classical and interactive engagements and exhibitions. Located in the heart of downtown St. Petersburg, the 2,031 seat cultural jewel boasts spectacular waterfront views and is located only minutes away from white sandy beaches and world-renown museums.  Additionally, the theater supports the highly successful Class Acts program, which enables school children to experience the performing arts through in-theater performances as well as in-school outreach and extension programs.